Goals that are specific, measurable, actionable, realistic and  time specific (SMART) are more likely to be achieved when written down and agreed.

Once the demands of your goal event are identified, this gives the tools to set your goals for season ahead and start your journey towards achieving them.

After having looked at Identifying your Personal Strengths & Limiters from last seasons training in a Season review and the Event type and duration in Power demands of your goal event; this should now give enough of an idea as to what General demands to work on in training.

These General demands are the main focus of the Base phases of training. Firstly; looking at the base endurance needed. Things have progressed for most cyclists since the days of long and slow zone 2 training all winter long. “Intensity” is a commonly used word these days for describing base training content, which is a massive over simplification. The type of intensity prescribed depends on a number of elements.

The General demands to be worked on in these phases, still relate to both the individual athlete and the general demands of the goal event being trained for. For example intensity in base phase training towards a 4 hour road race will have a main focus on building up zone 3 power, and later, sweet spot, leading up to maximising total time in sweet spot for one ride, that closely resembles the goal event total duration, by the end of base phases.

These goals still also partly depend on the individual as well. For example, how much sweet spot time you build up to is greatly dependent on how many years of solid cycling training you have had. Another example of intensity in base phases training towards a criterium will have a main focus on building up FTP power and FTP duration so that it matches closely to the duration of the goal criterium. 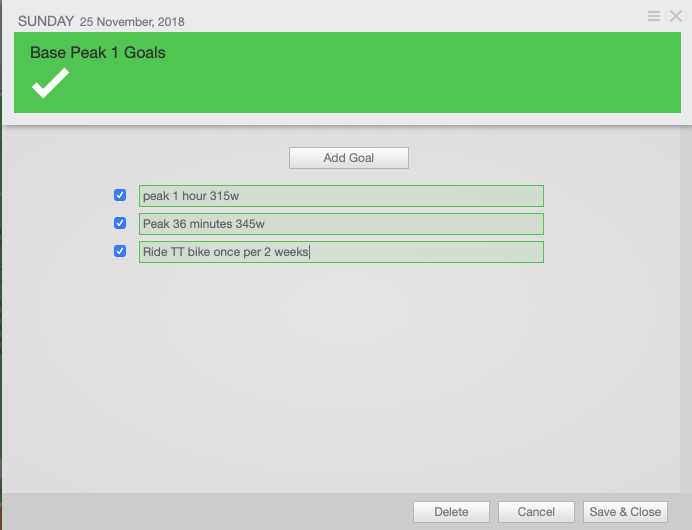 An example of general training goals that had been achieved by the end of base phase, ticked off by coach.

In working towards improving Strengths & Limiters for the coming Season, having identifying the areas that are stronger, and those less so, in the Season review; this is the time to collect what was discovered in identifying your personal strengths and limiters in events and training.

These strengths and limiters should then be a starting point to work on a new plan, in combination with the specific demands of your goal event. These specific goals are mostly added to “Build” phases, as well as an event peak phase of Overreach of training load and final taper.

Some of the specific training goals come from the identified demands of your goal event. The demands are then matched up with training goals to get you as close as realistically possible to each power demand of the event. 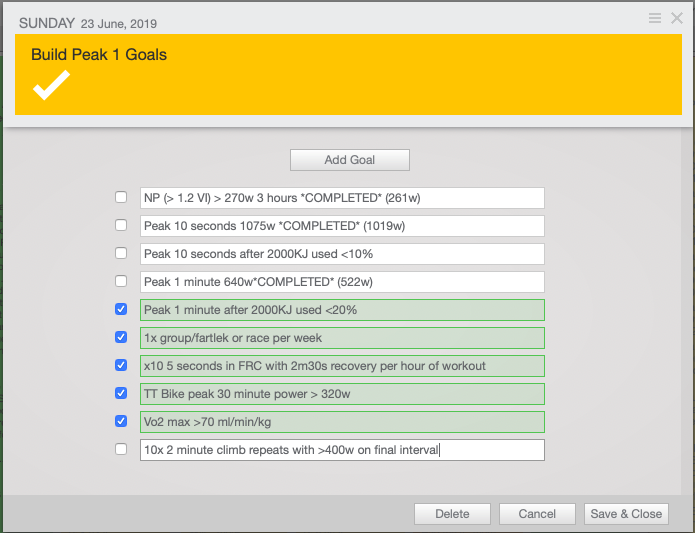 An example of specific training goals that were to be achieved before a goal event and were reviewed by coach.

Having decided on the content of the types of workouts, the next step is then to optimise the timing of these, so that you find form at the right time.

There are some core principles used in CPT Cycling training plans as to the timing of phases; starting with a post season Transition phase to detrain, adapt and recover physically and mentally from the season just gone. This can still be structured training for skills best perfected before returning to harder training, or a greater degree of less structure depending on your personal preference for what motivates you at a time of year like that.

The Base 1 phase comes next; working strength and getting back to previous training duration. This phase normally lasts around 1 month. General training goals are then worked in to add intensity into the plan on Base 2 and 3. Depending on the length of time from the start of off season training to the season goal event, the base 2 and 3 are the phases that can be lengthened or shortened from anywhere between 1 - 3 months.

Once the building blocks of General endurance intensity are established, intervals more specific to your goal event are added that go beyond general endurance, that are needed for your chosen event, will then added into Build 1 and Build 2, normally both around 1 month long. A short 1-2 week Overreach is next to follow, that aims to finish off the established training goals, with a 1-2 week taper to follow.

The closer you are to your goal event, the greater the importance for timing week to week to find maximum sustainable long term training load (also known as Chronic Training Load, or CTL in the TrainingPeaks and WKO Performance Manager Chart) and in the final Overreach and Taper, this importance becomes greater day to day as differences in short term fatigue (also known as Acute Training Load, or ATL) and short term form (also known as training stress balance, or TSB), that affect event day freshness.

An example of a dual peak ATP, showing in bars; weekly training load planned through Training Stress Score (TSS) and the specific training phases shown along the bottom. Projected from TSS, is CTL in blue and TSB in yellow.

Each monthly build cycle is usually 3 weeks ramp up, for most effective ramp up of CTL for the given total training load. More so that for the same amount of training load over the 3 weeks with flat trended training load each week. This is normally followed by 1 recovery week to adapt to that overload and build on it.

However, there are exceptions to these general rules and in some cases, the 2 week build instead of 3 week can be more effective certain differences, depending on, among others:

During the Base phases, the total load will often be slightly less, especially for more established cyclists. But it is also important to build up a buffer for the year in case of illness, injury or unexpected commitments outside of the training plan.

Once the base is established, then there can be a higher tolerance to training load and intensity in the Build phases and more so in overreach, where short term fatigue tolerance can hit new heights that would not be sustainable in the long term, to give a final boost. It is then just a matter of fine tuning short term fatigue in the taper to give freshness on the day of your goal event.

An example of a final build of CTL with taper reducing TSB and ATL back to fresh, but not too fresh for optimal race day form for the date of the goal event on the far right.

Once the timing of the training phases and the training load based from Training Stress Score (TSS) are in the TrainingPeaks ATP, This will show how much CTL, ATL and Training Stress Balance (TSB) the planned TSS will give if the plan where to be completed 100% as planned.

This allows the CPT Cycling Coach to check if there are points in the plan that give too much fatigue that unplanned recovery would be needed. This would be detrimental and it can also show if there are points in the plan where there is not enough training load for your optimum, based from your training history that has been looked over in a Season Review. The weekly TSS can then be amended for a more challenging TSS.

An example of when one athlete performs better at different CTL and TSB with the best 7 day rolling FTP selected and the top 5 in green. These scores differ from athlete to athlete and season to season. This individual performance trend is considered by the CPT Cycling coach when constructing a long term build and taper.

Striking the most effective balance of training load and timing is an ongoing process as you and your Coach learn more about your individual optimum. With regular and effective communication between both sides, a coach can then combine their expertise and experience to their knowledge of you and that's where you then have a truly bespoke plan that is effective for you and no one else.

How To Use WKO4 To Construct Training Plans

Covid 19: What Now For Your Cycling Goals?